Interaction between chemical reactions and mixing on various scales

Interaction between chemical reactions and mixing on various scales is an important topic in both industrial applications and education.  Our colleague at Scale-up Systems, Dr Steve Hearn, authored a paper of this title in 1997, on completion of his PhD with Professor John Bourne and Professor Jerzy Baldyga (their subsequent book available here).

Steve's paper demonstrated the importance of 'mesomixing' for chemical reactions with fast kinetics and has been cited heavily when this concept has been applied since that time to reaction and crystallization systems, for example.

Steve's PhD included measuring and modeling 'Bourne' reactions (azo-couplings of 1- and 2-naphthol) in a Kenics static mixer and varying the flowrate / energy dissipation and fluid viscosity.  These were some of the first models we included in DynoChem and the figure below shows comparison of measured and predicted 'XQ' values.  Low XQ (side-product formation) corresponds with faster mixing. 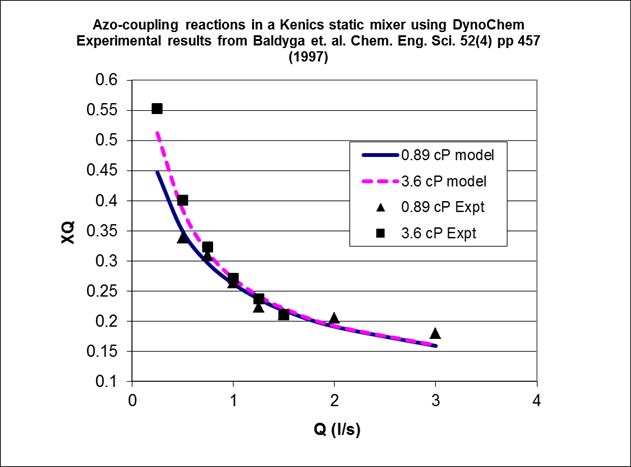 In addition to template models containing the competing chemical and mixing time constants as parameters, we also included 'utilities' so that user can quickly estimate the time constants from reactor geometry, operating conditions and feed position/ rate.  And together with Professor Bourne and other leading authorities on mixing, we built a range of knowledge base articles from which users can learn all about it.