There are not many poets associated with QbD, so this next one is a bit of a stretch to include in the series.  The technical QbD contribution comes from Dr Art Etchells, the outstanding fluid mixing consultant who had a long and distinguished career at DuPont and now teaches and consults more widely.  For an example of Art's work, see his chapter on pipeline mixing in the Handbook of Industrial Mixing.  Anyone designing flow chemistry systems will find this material useful and we are building related tools for our users.

The rhymes and philosophical contribution are from Dr Seuss, to whom I was introduced by Art [tenuous connection - Ed] while walking in downtown Philadelphia about 10 years ago.  I was looking for books for my daughter and being European had not heard much about Dr Seuss.  After Art's introduction, we never looked back and my daughter went on to read early and well.  I was struck by the quality of the writing and still pick up the books today, while she has outgrown them.

One in particular seems to encapsulate much of the QbD journey: I Had Trouble in Getting to Solla Sollew (aka The Desired State).  You can buy the book at Amazon, for example - I recommend it for any age.

The pre-QbD era is remembered with nostalgia early on:

I was once happy and carefree and young
And I lived in a place called the valley of Vung
And nothing, not anything ever went wrong...
Until one day, a defect / deviation / excursion from a poorly understood process occurs:

Sock! What a shock!
I stubbed my big toe
On a very hard rock
And I flew through the air
And I went for a sail
And I sprained the main bone
In the tip of my tail!
A better way to work is needed, and our hero devises a plan:

If I watch out for rocks
With my eyes straight ahead
I'll keep out of trouble
Forever, I said.
This univariate approach does not work:

In an apparent reference to a proven acceptable range (PAR):

I'll watch out for trouble in front and back sections
By aiming my eyeballs in different directions.
There were some difficulties with the PAT instrumentation:

I found this to be
Quite a difficult stunt
But now I was safe
Both behind and in front.
And the multivariate nature of problems makes things more difficult:

Then new troubles came ...
From above!
And below!
And now I was really in trouble, you know.
An adviser of sorts comes to his aid (in a 'One Wheeler Wubble'; e.g. via a LinkedIn group), promising:

I'm off to the city of Solla Sollew (Desired State) 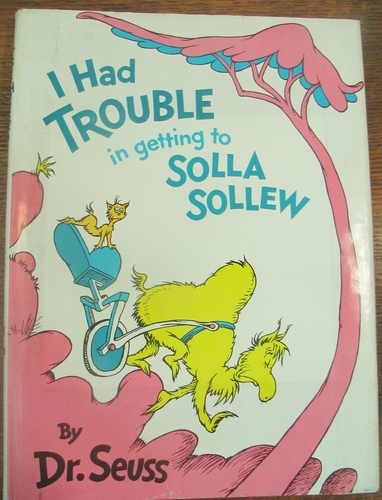 On the banks of the beautiful River Wah-Hoo
Where they never have troubles! At least, very few.
They jump aboard the adviser's camel, but later encounter unforeseen issues:

So there, there we were in a dreadful position
Our camel now needed a camel physician.

In a familiar twist, our hero ends up carrying both adviser and camel, while the adviser reassurres that:

This is called teamwork.  I furnish the brains
You furnish the muscles, the aches and the pains.

The journey continues with more learning experiences until finally Solla Sollew is reached, only to find that troubles have come to light even in that fabled place and the natives tell our hero:

And I'm off to the city of Boola Boo Ball...
Where they never have troubles! No troubles at all!
The hero thinks of going there, then has second thoughts:

So I started to go
But I didn't.
Instead...
I did some quick thinking
Inside of my head.
He decides to return home and solve his own problems, by obtaining appropriate tools:

I've bought a big bat
I'm all ready, you see
Now my troubles are going
To have troubles with me!
Back in the real world, there are more than two hundred of those 'bats' in DynoChem Resources.

You can hear all about them from our customers at the DynoChem 2011 Meetings in Mumbai, Chicago and London.