If science is about innovation and lateral thinking then both these qualities have been on display at DynoChem’s London User Conference as scientists from GSK, Pfizer and AstraZeneca amongst others have been describing this morning the wide variety of ways in which they’re using our software when scaling up their experiments.

For example, thanks to DynoChem GSK can remove impurities from drugs in development even more quickly and efficiently, while Pfizer Ringaskiddy is using the programme’s Parameter Fitting facility to scale up hydrogenations. AstraZeneca’s microwave reactor is being used in conjunction with DynoChem to produce more accurate predictions in their experiments.


“When you work for a company you’re usually focussed on your own problems and challenges so it’s great to find out about the challenges faced by other companies and the problem solving tools they’re using with them,” says Garry O’Connor of Pfizer (pictured right). 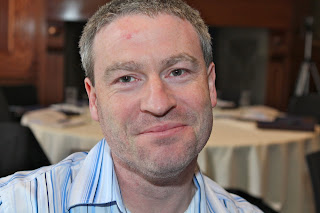 “The presentations this morning have been very interesting because they’ve been so diverse,” he adds. “Seeing the different ways that DynoChem is being used has been a real eye opener for me – especially seeing how other scientists are combining it with other problem solving methodologies.”

It’s not just during the sessions themselves that ideas have been exchanged and new ideas shared. The lunch break – and even the team photograph - have also provided excellent opportunities for swapping suggestions and tips for using DynoChem. 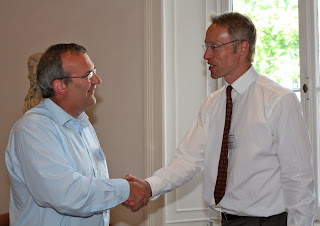 “The great thing about these user conferences is that you get a chance to network with other chemists but you also hear about the science,” says Dave Dale of SciMed (pictured right) who was previously at Pfizer was 35 years.

Like many scientists who have seen their testing times and their costs cut thanks to DynoChem, both Garry and Dave would like to see the system rolled out to a wider audience.

“There is a perception sometimes that DynoChem can only be used as a chemical engineering tool but it could be more readily accessible to mainstream chemists,” says Garry O’Connor.

As Dave Dale puts it: “Traditionally DynoChem has been used by specialists but it can be picked up by non-experts and used to solve problems. DynoChem should be for the masses!” Message received loud and clear!