Integration in time (and space) of the equations of mass, momentum and energy conservation plays a growing role in QbD.  An early contributor to this field was Lewis Fry Richardson, whose 1922 book, Weather Prediction by Numerical Process, laid the basis for modern weather prediction techniques.  Richardson also occupied himself with understanding turbulence and like Corrsin, was briefly moved to write a verse about his ideas.  Corrsin was inspired by Shakespeare; Richardson by Jonathan Swift and Augustus de Morgan to write about the cascade of energy from large to small scales:
Many subsequent students of turbulence and mixing built on Richardson's work, and the Richardson Number is named in his honour. He also analyzed wars using mathematics and had early ideas about fractals while studying the lengths of shared borders between countries. Recipients of the Lewis Fry Richardson Medal have included Benoit Mandelbrot.

When we calculate mixing timescales in reactors and crystallizers [Liquid mixing: batch and fed batch mixing times], we leverage the work of Stanley Corrsin, one of many pre-Internet scientists who laid foundations for our predictive abilities.  His paper, [Simple theory of an idealized turbulent mixer,  AIChE Journal, Volume 3, Issue 3, pages 329–330, September 1957] showed how the time constant for mixing depended on the rate of dissipation of turbulent kinetic energy.


Stanley loved his subject so much that he was moved to poetry.  He is responsible for the following sonnet, inspired by one of Shakespeare's (Sonnet 18 Shall I compare thee to a Summer's day?):
SONNET TO TURBULENCE by S. Corrsin [1]
For Hans Liepmann [2] on the occasion of his 70th birthday, with apologies to Bill S. and Liz B.B.

Shall we compare you to a laminar flow?
You are more lovely and more sinuous. 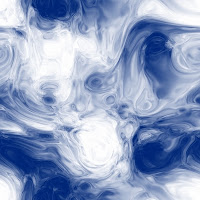 Rough winter winds shake branches free of snow,
And summer’s plumes churn up in cumulus.
How do we perceive you? Let me count the ways.
A random vortex field with strain entwined.
Fractal? Big and small swirls in the maze
May give us paradigms of flows to find.
Orthonormal forms non-linearly renew
Intricate flows with many free degrees
Or, in the latest fashion, merely few —
As strange attractor. In fact, we need Cray 3’s [3].
Experiment and theory, unforgiving;
For serious searcher, fun ... and it’s a living!